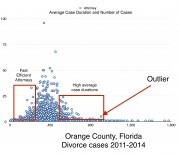 Premonition recently completed a study of 24,507 divorce cases, the results are very interesting, the answer is in the choice of attorney.

Miami, Florida, January 23, 2015 (Newswire.com) - The answer, according to legal analytics firm, Premonition LLC (www.premonition-analytics.com), very much depends on your choice of Attorney. Premonition recently completed a study of 24,507 divorce cases from 2011-2014 at the Orange County Courthouse in Orlando, Florida. “Divorce cases are useful to compare. While some are undoubtedly more complicated than others, or have more intransigent parties, at the end of the day, they all boil down to filling out 2 forms at the Courthouse. Pretty much everything else is at the discretion of the Attorneys involved. Over thousands of cases these differences get smoothed out and clear patterns emerge.” says Toby Unwin, Co-founder & Chief Information Officer of Premonition.

Unwin invented an Artificial Intelligence system that mines Court data for unusual trends and outliers. The system is typically used by General Counsel at big Companies seeking an edge in large litigation portfolios, or high stakes trials. The human element, Premonition claims, is worth an average 30.70% increase in Win Rate, which translates to substantial savings for clients.

Premonition’s database of lawsuits is one of the largest in private hands. Its sheer volume of information has enabled them to write database algorithms to solve questions such as:

• Which Attorneys usually Win before which Judges? Premonition claims most Judges have favorite Attorneys, the average Top 20 Lawyer before each Judge has an 80.70% likelihood of winning..

• Are big law firms better than small firms? Yes, but only by 6.98% and at a substantially higher average billing rate.

• How does billing rate correlate to Win Rate? Apparently it doesn’t, at least not by a significant amount.

“We had a client ask us for a family law Attorney”, Co-founder & CEO, Guy Kurlandski explained. “It’s traditionally not an area we spend as lot of time in because companies don’t get divorced.” he quipped. “Family law is the Wild West of the Legal profession”, Unwin claims, “It has a remarkable lack of precedents, the clients are usually legally unsophisticated and determining Win Rates is highly problematic. Our Artificial Intelligence system finds that there really aren’t many clear “winners” in domestic proceedings.” Unwin explains. They had a client ask for a “fast lawyer”, an unusual request for a company that specializes in finding “Winners”.

The analysis showed that it was indeed possible to process divorces quickly, and that even contested cases could be handled in a matter of months, and often were. However there was a cluster of Attorneys that had consistently high case durations. “Even though it’s the Public Record, there’s no sign outside Law offices saying “this is my Win Rate and this is how long my cases usually take”, says Kurlandski, “Even major corporations are usually litigating blindly, relying on big brand Law Firms that are, on average, only 3.49% better than chance.”, he says. Running Attorney analytics is the only way for a consumer to know.

While there were some cases lasting up to 1,800 days, the Lawyers handling them usually did few divorce cases. The firm found an outlier with 5 cases averaging 1,016. The last one had been going for over four and a half years and was set for trial. “It’s disappointing that Attorneys like this are allowed to continue practicing.” Unwin said. Premonition declined to name the Attorney, but said they would provide the Florida Bar with the information, if requested.

How does the average consumer avoid hiring a clock running Lawyer? “If you can’t afford to select an Attorney with analytics, then at lease check your short list at the local Courthouse website, see how long their cases usually run for.” Kurlandski recommends.